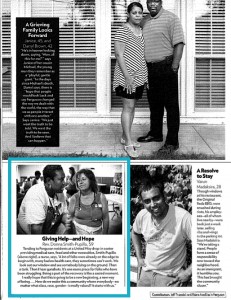 If you didn’t know what or where Ferguson, Missouri was three months ago, it is likely that you do now.

Covering almost every media outlet across the Globe, you saw crowds of people gathered in the streets of Ferguson, honoring the life of Michael Brown and demanding a more thorough look at police – citizen relations, specifically among African American communities in the United States.

For most protestors, the days were long, filled with uncertainty and heavy patrolling from opposing Police.  As we saw, some nights, innocent protestors were met with tear gas and rubber bullets because they were amid the radical actions of a few.  These conditions created various health issues for many and the Deaconess Faith Community Nurse Ministries Executive Director, Donna Smith-Pupillo, was among the many that assisted with those that needed help.

Donna Smith-Pupillo and  other Faith Community Nurses spent countless hours at the ground level to help the ailing community by administering health assistance and advocating for those that were there to demand equal treatment for all.  There work at the United Way drop-in center was featured in last month’s issue of Peoples Magazine.